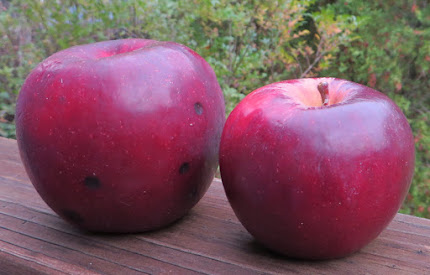 I took this photo back in October to show that the beautiful color of Jonathan (right) has the same deep tone as Ruby Jon's.

As his name implies, Ruby Jon is a sport of Jonathan—a genetic mutation that entails some difference or improvement valuable enough in this case for farmers to cultivate.

Better color may be the most cultivated sport trait in apples. For Ruby Jon, the "better" part means more coverage, not a different hue.

Sports can also ripen earlier or have other characteristics including, rarely, new flavors.

For these two, I didn't find any variations in eating quality that could not be explained by differences in harvest time or handling or origin (Ruby grew in the Midwest).

By the time I got these guys together, though, both were well past peak, so I could have missed something. The farmer who grew my Ruby Jon says that at her place, Ruby Jon trees "are healthier and the apples taste better" than regular Jonathan. My solo photo of Ruby Jon, in different light, shows the deep crimson shade a bit better. That color however is the same for Jonathan. Ruby merely has smaller patches of less-saturated red.