Mysteries in yellow and red

Imagine the World's Most Interesting Apple Gentleman, and an unknown apple.
He (the gent) inclines his head politely. Squints and sniffs at the apple before taking a bite, measuring its blush, parsing its lenticels.

He swirls the bits in his mouth. Pronounces, "Of the Snow family, I think."

Spits, bites again, chews. Swallows. "Yes. McIntosh branch. Not that that helps us much." The next bite is pensive. "But something else. Cidery."

Views the apple again, and studies the color of the revealed flesh. Holds it up to the light. "From the Nashoba Valley."

Consults some inner catalog. Cuts into the calyx and studies the stamen. "On a hillside facing northwest." Brilliant.

And alas, not me. For all my enthusiasm, I claim no particular talent for apple identification.

It's not even possible unless the apple is one of the hundreds I've tasted, versus the thousands I have not. Assuming it is a named cultivar at all, and not a chance seedling. 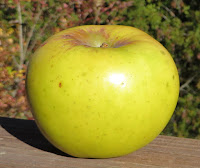 But it is fun to try, and around the American Thanksgiving Steve Barnhart sent me 2 varieties, 3 each, six in all, from his home orchard in upstate Michigan. Big handsome specimens, well packed.

He thinks the yellow apple might be Northwest Greening, and generously writes,

Enjoy some of my personal favorites and don't feel obligated to write up a long response.


Oh come on Steve, not even try? I take your generosity as permission to fail, but not to duck the challenge. Of which the red apple turns out to be the greater puzzle.

Thanks to the generosity of Lisa Boes, another reader, I happen to have a Northwest Greening for comparison. I've been hanging on to it to see how it ages. (Well, by the way.)

Consequently I am very confident that Steve was right about the big yellow guys. Visually, and in terms of texture, they're a perfect match with Lisa's. (The match is less exact with my NW Greening review from 2009, because my samples were not as ripe, but it is not too far off.)

So let's assume the Awesome Apple Gent agrees with me, and shift the white heat of our attention to the mystery red. 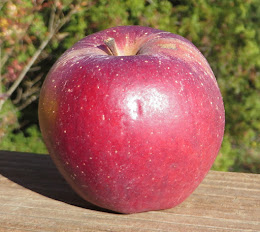 Though not nearly so imposing as the Greenings, these apples are still plenty big. They are conical and tapered and moderately ribbed, and a little lopsided.

The apple has a rich cidery smell, and the peel is waxy enough to repel water. The calyx is closed, but not tightly.

I started out with the idea that this could be a Cameo, with extra time on the tree accounting for the unusually dark red color. But the flavors are too interesting for that.

Inside I found fine-grained yellow flesh, a little past prime but still rewarding. The flesh is shot with streaks of red. One apple was slightly savory, another more cidery, all with a chewy peel. Mostly sweet, but a nice lively acid tang, a little spice, and a whisper of honey.

The tell for me was the savory note, and also the color of the peel and the low-gloss finish. Surely this is the Stayman, also known as the Stayman Winesap. Possibly one of its well-colored sports. On the very outside, perhaps a true Winesap.

Stayman can be quite good eating in December, though I think these may have been harvested on the late side. Stayman is known as a southern variety, but the Michigan extension service lists Stayman as a Michgan apple.

I'm not quite as confident that Mr. Apple Gent would agree with me on this one, but it is my final word.

Thank you Steve, and Lisa, and everyone, for your generosity and indulgence.
Posted by Adam at December 15, 2016