My trip to the western part of Massachusetts only scratched the surface of this two-day, three-ring collection of tastings, tours, meals, and workshops.

Note: yes, it's Cider Days, but where cider leads, apples are never far behind.

The event is spread thinly over a rural swath of Massachusetts. To the extent that Cider Days has a heart, it is the community center in Shelburne Falls.

Here are panel discussions and presentations about making cider and caring for old apple trees, while outside farmers and cider makers offer free tastes of ciders and fruit.

Still, the only place I saw anything like a crowd was at Clarkdale Fruit Farms in Greenfield.

Turns out the subject was: pie.

Robert Cox, author of New England Pie: History Under a Crust (History Press, 2015) held forth on pie in all its forms, including mock apple, mincemeat ("evil"), and the correct mode for a la mode (vanilla).
Cox is a historian and head of special collections at the DuBois Library at the University of Massachusetts at Amherst.

Clarkdale also had a tasting table, one that included pear and quince. 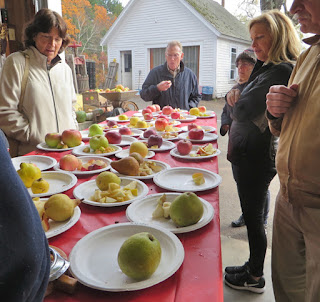 Meanwhile, the line to taste cider was long at Tip Top Orchard in Buckland.

I was disappointed to discover that Tip Top, which grows about 100 upwards of 200 heritage varieties, had no apples this year. However, Artifact Cider had made about a thousand bottles of "Tip Top" hard cider made from the orchard's 2015 heirloom harvest.

(Overheard at the tasting table: "We just stuck the labels on this morning.")

Also at Tip Top I learned the story behind the name "Second Chance Farm" (the tasting table in Shelburne Falls, above). Most of the trees at Tip Top were planted, in the 1970s, by the couple who later moved to Greenfield and founded Second Chance.

I also stopped in for a tasting of West County Cider's varietals. Variety-specific cider is a logical point of departure for someone who knows more about apples than cider.

The West County folks noted my interest in heritage apples and obligingly poured me a sample of an interesting Baldwin–Ashmead's Kernel blend that is not available this year.

I walked away with a bottle of West County's "heritage" blend, which leans on a cider apple called Rosemont. They had some drier ciders that I liked a great deal, but I judged the heritage blend to be more accessible generally and a good bet for the Thanksgiving table.

I also came home with a bottle of Artifact's Baldwin varietal cider and some unpasteurized sweet cider from Second Chance.

First, in early November the hills of Franklin County, tended and wooded, are fairy-tale ravishing.

Finally: A touchstone of Cider Days is friendliness. It does not take much to start an interesting conversation about cider and apples. I had a great time!
Posted by Adam at November 06, 2016