A Lady in winter 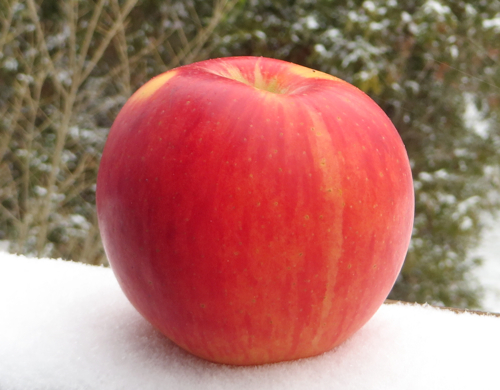 They're available now. But are they any good?

Lady Alice made her New England debut in the spring of 2010, leaving a very favorable impression. I awarded her two stars ("worth seeking") for great texture and rich and unusual flavors.

That this variety needed to sit until March or April to reach her peak was a feature, not a bug; having something this good to bite at that time of year was a welcome treat amid the tired supermarket standards.

Starting in 2011, reports began to trickle in here of this variety for sale in February. Or, I should perhaps say, complaints: blandness, bitterness, a "chemical taste," and general dissatisfaction.

In 2012 the marketing director from Rainer Fruit chimed in to say that as more trees bore more fruit the company was bringing Lady to market sooner, and implied that there were steps Rainer would take, such as taking them out of storage earlier, to make the apples fit to eat in February.

Indeed this ought to be true, but the early Ladies I found continued to be sub par.

So when I saw some for sale in mid January this year, I rolled my eyes and moved on. But Lady Alice seems to be in multiple supermarkets now. I felt I owed it to my readers and myself to check them out. Here is my report.

Physically these attractive apples look the same whenever I have seen them: a ribbed, slightly tapered profile with the flamboyant orange effect that comes from painting a yellow peel with a streaky red blush.

You can see it for yourself in the photo above, which shows the very apple I sampled earlier today.

No, the question is taste. And that was good, if perhaps not as good as I know Lady Alice can be.

Mine was very juicy and crisp with Alice's characteristic malt flavor. There was also a new almond-extract note that I felt was not an entirely successful addition.

Generally, though, the flavors were rewarding, rich, and quite sweet. And well worth worth eating—I went right out and bought some more—but not as good as the ones I've had later in the season. There is maybe a little bit of starchiness, but still plenty of sugar.

So: There seem to be more of these about, and Rainier seems to be getting the hang of getting them ready for an earlier market.

But if you want to experience Lady Alice at peak, I still suspect you must wait until late March or even April. Give these a try then and you will not be disappointed.
Posted by Adam at February 08, 2016