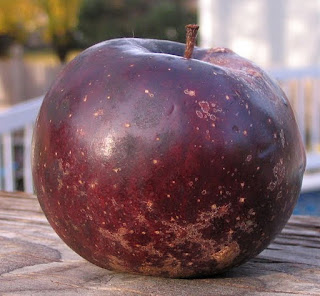 David D'Angelo of Hawk Farm in Maine gave me a few of these earlier this year, the best examples I have had yet.

I'm not replacing my 2010 tasting notes for Black Oxford, but here is a post script.

These were nice and dark, a deep red with both purple and mahogany overtones. Many light lenticels of varying sizes are sprinkled across the dark like stars in the night sky. Biting in shows dense white flesh with streaks of red from the richly colored peel.

Black Oxford is not strongly flavored but has a good dense texture and of course a striking appearance. These were a bit crisper than my 2010 sample.

As in 2010, Black Oxford's mild tastes include some cane sugar and a hint of vanilla.

There was a bit of generic citrus in the finish this year, though nothing that really clobbers you like, say, the lemon in Ashmead's Kernel. I did not find the sweet-corn note this time, and the peel was more tannic than grassy.

I would search these out again in part for their satisfying texture. They are dense and filling, though not ligneous like Arkansas Black or Winter Banana (and not as good keepers either).

These classic Maine heirlooms, grown in Maine, were welcome late-fall accents this year.
Posted by Adam at December 25, 2011