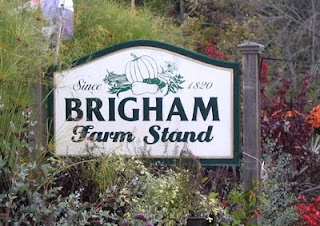 What impressed me first about this little farm stand was the hand-written note warning that the Macouns were "not at peak" yet. (That was in early September: the Macouns have been pretty wonderful for the past month.)

Since then Brigham has surprised me with several unusual varieties. But the sign signals a respect both for apples and the people who appreciate them.

Located three miles south of Concord Center since the early 19th century, Brigham no longer grows its own apples. It's still a good place to buy them, though.

I found a healthy selection of some sixteen varieties, changing a bit each visit. These include popular apples like Macoun but also such lesser-knowns as Golden Supreme, Suncrisp, and even Winter Banana, an heirloom.
Posted by Adam at October 23, 2010