No verbal airbrushing here. My descriptions of apple varieties include, to the best of my skill, an account of the fruits' cosmetic imperfections.

I hope you are not put off by apple russet, or those little black speckles, or even the large dark indentations I've found on some varieties. I'm not. But I do wonder: What are they? 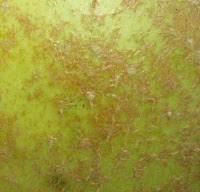 There's no mystery about apple russet--it's a rough cork-like discoloration on the apple skin in response to microorganisms or other stress. Some varieties are more prone to russet than others and some are completely russeted (and are known as russets).

This year I noticed small patches of tiny black stipples or specks on many varieties of apples. They cropped up only on regions of the apple with no blush.

I speculated that they were some kind of russet or other disease. Like russet, they are only skin deep; unlike russet they have almost no tactile presence.

The stipples are flyspeck, a disease caused not by flies but by a fungus.

You can see, obliquely, some patches of flyspeck in the photo I used on my Shamrock review--they are on the upper right side. 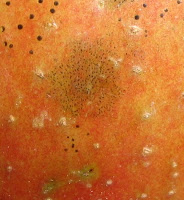 I have also found Baldwin apples marred by sooty blotch. The name of this blemish is perfectly descriptive.

Like flyspeck, which often accompanies sooty blotch, this imperfection is confined to the skin, is caused by a fungus, and does not affect the apple's flavor. Judging from photographs of sooty blotch available online, the Baldwins do not have a bad case.

Many newer apples have been bred for resistance to these and other diseases. Consequently these marks often identify older varieties. 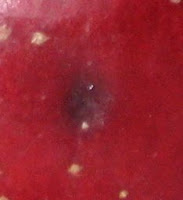 When I first noted the "dark dimples" in the surface of Melrouge, I thought perhaps they were characteristic of the variety, either some quirk of the breed or a disease to which that particular fruit was especially vulnerable. I've since seen these unmistakable marks on other apples. I can't remember ever seeing them before.

They are the marks of hail. Unlike some parts of the United States, New England does not get many large hail storms, but last summer we had a beaut. So they are dueling scars rather than beauty marks--with no effect on the eating part.