This remarkable keeper today is perhaps past peak, and some of the remaining apples have deteriorated more than others.

Nonetheless the flavors are still vibrant and rich, and the texture is not at all mealy even when yielding.

These apples spent the winter in my unheated mudroom, with occasional overnights in my kitchen during cold snaps. They moved to the fridge in the spring. 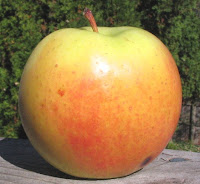 I wrapped each apple in a page from the Boston Globe and then put them in groups loosely in open plastic bags, the whole thing in a shopping bag.

Mysteriously, these apples did not all fare the same side-by side. But even the few partially wrinkled ones are still worth eating.

I should note that some were probably a little under ripe when I bought them last fall.

I am not documenting the progress of these apples as obsessively as I did that of Arkansas Black. Black is also a good keeper, though nothing seems to come close to Gold Rush.

The Golds seemed to peak in April, but they remain awfully good in June.

Keepers are sometimes called "winter apples" for when they are mostly eaten. Gold Rush passes that yardstick by at least a season.

I've rewrapped these carefully and returned them to the refrigerator—minus the one I ate.
Posted by Adam at June 12, 2017