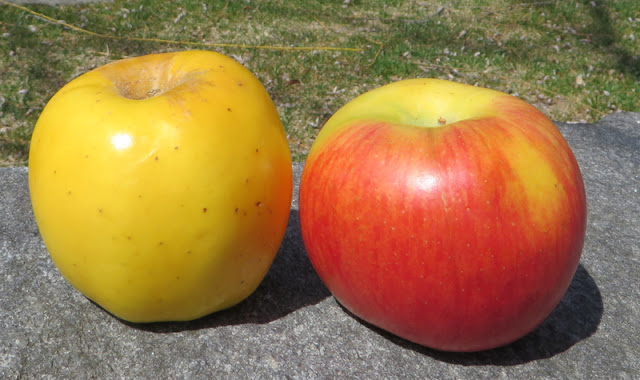 These two modern varieties rise to the top in the off season. Their distinctive flavors set them apart from the older Gala-Braeburn generation.

But which is best?

We are able to answer that question, with qualifications, because both of these apples are more abundant this year than ever before. The North American orchards that first introduced them a few years ago are really ramping up their harvest as new trees mature and bear fruit.

Both apples have spent time in high-tech storage and, probably, are a little past their respective peaks in April. 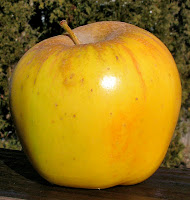 My Opal is a squat, classically shaped apple that is a cheerful banana yellow with a light pale orange blush over perhaps one sixth of its surface. Except where filled in by russet, its small lenticels are nearly invisible.

Lady Alice is pretty, a paler yellow with a streaky flamboyant orange blush covering most of the peel to some degree. It's similar in shape to Opal, a little blocky and a little ribbed, but is bigger.

For some reason the apples in the batch of Lady Alice that reached my supermarket are outsized. This one is merely big, but I have another in my refrigerator that is gigantic.

This poses a challenge to someone who is going to eat two apples in one sitting (anything for you guys), but don't be surprised to find smaller or bigger versions in your supermarkets in future years. Size varies.

Both of these apples have a shiny, greasy finish, signifying an abundance of natural wax. Alice more than Opal.

My Opal has excellent crisp texture, medium-coarse light yellow flesh. It is juicy and sweet (this is a modern variety) but has a little tempering acidity in its backbone, and the flavors include banana, vanilla, and a little honey. There's some subdued spiciness. 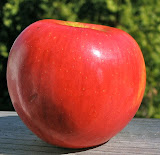 Alice is more obviously past prime: her finer grained lighter flesh has a little give to it, but the overall crunch is still quite robust. As I've noted elsewhere, Alice goes rubbery rather than mealy, and that is a good thing.

In terms of taste, Alice is sweeter than Opal, but it is hard to complain about that because of the wonderful malt note that comes with the sugar. I have only found one other apple with that quality. There is also a faint citrus accent, but the malt really takes charge in the end.

Switching back, Opal is crunchier but in Alice's shadow its flavor set seems somehow thinner. That's a far cry from how I would describe the apple by itself. A very little pear character also comes through.

This is close, with Opal excelling in texture and balance (by a hair) and Alice in richness of flavor. I have to give extra credit for that wonderful malt.

A sugar-averse palate might prefer Opal, though it is also no slouch in the sweets department.

I imagine that were Alice at her true peak, which seems to mostly happen in March, she would clearly edge out Opal for the laurels in this contest.

Although these are not local and, like most modern apples, really much sweeter than they need to be, April would be seriously impoverished without them. I am grateful to have these two varieties available this year so much later than they have ever been before.

In these head-to-heads, I sometimes discover that two apples have a sort of natural synergy and eat very well together. This pairing does not have that quality.