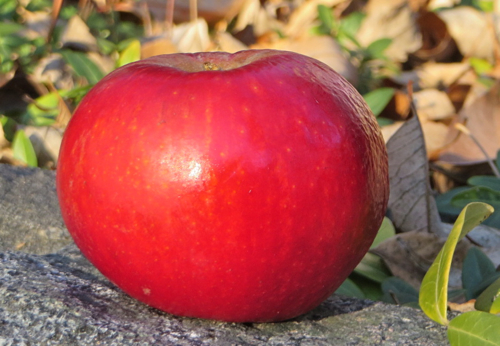 I had a chance to try Rubenstar again while in California, probably picked in October, 3 or 4 weeks later in the season than the 2013 samples.

These are much smaller apples (see why that might be), and very pretty. The blush is streaky red over yellow, further varigated by many light lenticels.

The apples are round and slightly ribbed. The blush on one of mine runs to a very deep pure red, neither brown nor purple.

The texture of this coarse-grained apple, pale yellow, is good, with a crisp delicate crunch. Flavors are more or less as previously noted, but there is a nice astringent finish I missed the first time.

I remind my gentle readers that the growers of this apple insist it is not to be confused with Rubinstar (with an i), which is a redder sport of Jonagold.

The e Rubenstars look a little like Jonagold, and there are some similar eating qualities, but many differences too.
Posted by Adam at December 05, 2015