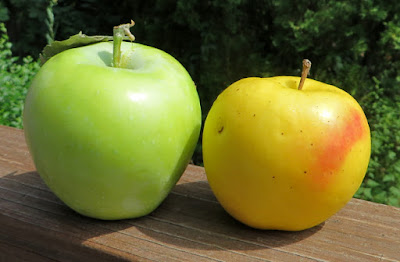 In this photograph, Lodi (left) and GoldRush clasp hands across the seven barren months that divide one harvest from another.

Lodi, the tapered green fruit at left, is the harbinger of the new harvest, the first and only apple at farmers market.

GoldRush was picked last October and has spent its days in my mudroom and refrigerator.

Let's see how they compare.

Tapered spring-green Lodi's claim to fame is that it is first. I'm afraid it is not otherwise a very distinguished apple.

Sour and acidic, Lodi never seems to be fully ripe. Like most early apples, it deteriorates quickly after harvest even in a refrigerator.

Yet the first bite of that first Lodi is magical after a surfeit of sleek sweet supermarket apples. It says "local apple" with complete and satisfying authority.

Bring on Vista Bella, Pristine, Williams' Pride, and all the great apples of summer.

I know of no more remarkable keeper than GoldRush—no other apple that will keep so well under "normal" refrigeration. They simply do not go mealy.

I have been eating into my sunshine-yellow hoard gradually since April, when they were at peak and a true treat. 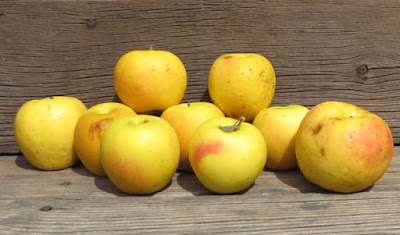 Squeeze this GoldRush today, however, and you will feel the apple give a little. The ones I've been eating lately are still good but no longer great, their flavors melded and character flattened.

As a chaser to Lodi, GoldRush is very pleasant, with great texture, a decent, slightly rubbery crunch, and plenty of juice.

Compared to the saturated richness of April, the apple today is mild and even delicate.

Lodi following GoldRush is harsh and cleansing. Its texture is never all that great.

Both of these apples do a bit better on their own than together. Lodi displays lime and grapefruit, with a little gingery spice.

GoldRush has less distinct flavors, but there is some pear and a distant hint of vanilla, along with some very pure cane-sugar sweetness.
Posted by Adam at July 23, 2017